It’s quite common to analyse a measure by categorizing it into different buckets or bands. For example to list the customers who are due for payment in the next week or fortnight, to decide which income group to target for a particular product campaign, which age group of students are most likely to buy a smartphone and so on. These bands are usually not supplied by source systems but derived from the underlying measure and they exist only for analytic purposes. While this banding could be achieved in reports or dashboards, there is significant value to model them as dimensions especially to promote self-service BI.

In this example, fact_admission represents the fact data collected from hospital admissions. AGE_YRS is the client’s age at the time of admission. DIM_AGE is banding dimension for age group with the granularity being AGE in yrs. 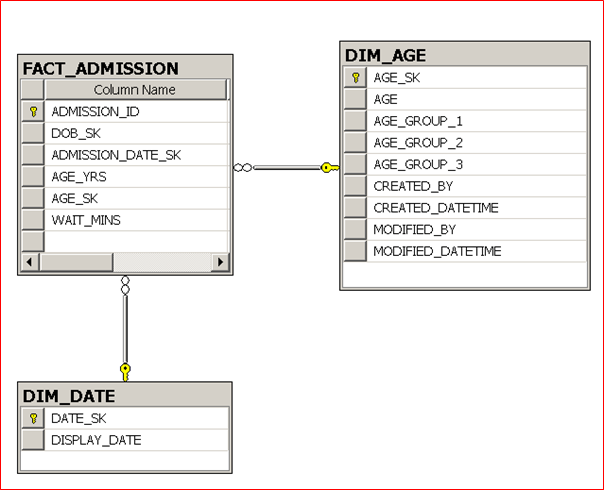 The three age group bands are defined as follows

Incorporating banding as dimension simplifies reporting, self-service BI platform and also provides a design that is highly scalable. Banding can be extended to any measure like income, duration, count , miles and percentile and so on.

In a self-service BI platform, every member of a dimension attribute is available for browsing irrespective of whether the member has an associated fact or not. Though the unused members disappear when browsed alongside facts, they are still undesirable when used as filters. This is especially true with role playing dimensions which cover a broad range of data to cover every scenario. No one wants a date filter starting at 1900-01-01 and going all the way to 9999-12-31.

There are different options to exclude the unused dimension attribute members

Option 1: Use a View on Dimension Table

It’s always a good practise to build dimension using view on dimension table because of the agility it offers. A simple view like this would filter out any member that’s never been used in any fact table.

Option 2: Use a flag on Dimension Table

Option 1 works like a charm on small dimension tables. With large data volumes, the SSAS processing time on these dimensions tend to increase because the query gets executed for each attribute. This can be overcome by modelling the dimension to include a materialized flag to indicate whether the dimension member is ever referenced by any fact. This flag is set to true by the ETL before the SSAS cube is processed using a simple update statement

The update statement would execute much faster when compared to SSAS processing time especially if a view is created on the dimension table to include only the dimension members in use.

Self-service BI platforms are inevitably augmented by few out-of-box SSRS reports and dashboards. By using MDX expressions and data sets you could customizes the filter to display only the data relevant in that context. Here are some MDX examples for SSRS and PerformancePoint

By combining the above options you could ensure that your self-service BI platform is agile, practical and user friendly.

Dimension Tables usually have a member with Surrogate Key (SK) value of -1 to handle unknown members. Unknown SK is usually set when SSIS look-up on a dimension table fails to return a match based on a business/natural key. END_OF_DOCUMENT_TOKEN_TO_BE_REPLACED